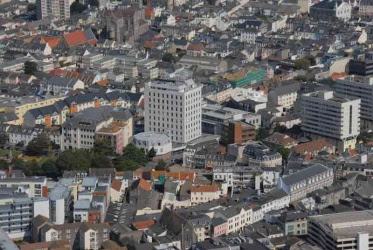 Another week, another consultant, another few millions down the drain, and another bout of patronising sloganeering.

In the latest episode of Kommandant Karl's quest for lebensraum on sunny Jersey, it's come out in a recent States announcement that actually, the five consultants comprising Parker's current hit squad (who as of the beginning of September have already cost the public purse over £9 million) aren't going to be enough to stomp out the remaining vestigial traces of democracy in Jersey create a "one government, Team Jersey" culture in the civil service, and that we're going to be bunging another £3.5 million the way of yet another gang of consultants to deliver the corporate-isation we apparently so desperately need.

Quote from the SOJ statement, "Team Jersey partner announced", dated 20th September 2018: "The first phase of the £3.5 million ‘Team Jersey’ initiative will see a group of ministers, stakeholders, islanders and employees working with TDP to co-design the programme."

"This will then be rolled out to all 7,500 employees to improve teamwork, collaboration and leadership capability, develop new ways of working, build a customer-focused approach, and help to embed the behaviours and values that underpin the new structure."

TDP refers to the TDP Group, a consultancy firm based in Halifax in west Yorkshire, and I can only assume that "stakeholders" refers to the crony capitalists in the financial sector. I can almost imagine the board room meetings between SOJ and TDP - "hey, guys, you know what politics in Jersey really needs? Even more disproportionate influence from the financial sector!".

Main question here - why have we been previously led to believe that Parker and the Gang of Four were going to transform the civil service themselves, and then suddenly this new group come onto the scene? For someone whose election manifesto included a commitment to "achieving greater value for money" in the public sector, John le Fondré seems like he's being way too easily taken for a ride.

It's not like this reform process is actually getting anywhere quickly, either. The civil service is practically in a state of anarchy - departments are shifting responsibilities, ministers aren't sure of their portfolios, Parker and co. are tossing more and more consultants and transformation programs into the ring and pouring gasoline onto a fast-building fire that seems sure to end with a major civil service strike and showdown between public sector unions and the state.

I had hoped before the election that if JLF ended up as Chief Minister, he'd be able to try and bring this gravy train to a screeching halt.

Seems he's perfectly happy to allow us to run right off the tracks instead. 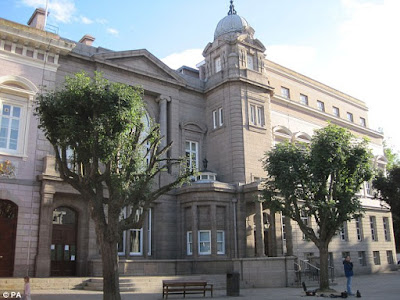 Are you a rapacious greedy shyster concerned about politicians trying to reform the gigantic scam you and your buddies sell to keep the lights on?

Do you think access to justice is a privilege to be enjoyed by rich people rather than a human right essential to any democracy worth the name?

Do you suffer from a particularly nasty persecution complex?

Then maybe, just maybe, sir, the Jersey Law Society is just what you've been looking for!

This week in Jersey: y'all get to hear the playing of the world's smallest violin, as our lawyers threaten to go on strike over reforms to legal aid currently being pushed through the States. The reforms in question? Brand new, shiny Access to Justice laws, which introduce a new legal aid scheme intended to make it easier for more vulnerable and less well-off members of our society to access legal support if they end up in the dock. Pretty uncontroversial, right? Access to justice is a fundamental underpinning of the rule of law, right? It would be completely insane for anyone to actually get offended by the idea of helping poor people afford a lawyer, right?

Or, at least, the president of the Law Society of Jersey seems to think so.

Sadly, the rag's coverage didn't include the whining email that Law Society president John Kelleher sent to his members on this topic, but it did include a few choice excerpts which to my mind really demonstrate the pure stone that Kelleher's heart is truly made of. Quote: "The effect of such changes would be to increase direct political control over the guidelines, while reducing the Law Society’s influence and involvement, with the potential for arbitrary and unilateral changes to the guidelines to be imposed."

"These changes in the round, if accepted and voted in by the States of Jersey government would in all likelihood increase the legal aid burden upon all the members of the Law Society."

Oh no! Shock horror! Hold the phone! Kelleher and his bandits might be obliged to surrender some of their control over the legal aid system to our democratically elected representatives! They might even have to help slightly more working-class people use the justice system for its intended purpose!!! Oh, the sheer humanity.....

Poor me, poor me, pour me a drink. Does anyone seriously believe this gang of spivs has any intent whatsoever other than to maintain the cashflow into their own pockets? What a joke. It's worth noting, as the rag did, that while the current threshold for legal aid stands at a total household income of less than £45,000, the Law Society wants to see that reduced to £30,001.

Have any of these gangsters tried surviving on £30K a year?

Go on, lads. Go on strike. Show us what you're made of.

The people of Jersey are laughing in your face and spitting in your path.
at September 17, 2018 6 comments: 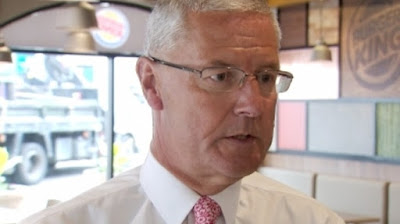 Tony O'Neill is sick of your shit.

In a whining letter in today's rag, chief exec of Sandpiper CI - the franchise that runs a lot of big-brand businesses in Jersey like Costa, Iceland and Cornish Bakery - has lashed out at critics who claim that his food is overpriced compared to the UK.  In his reasoning, he sets out a couple of major points explaining why this is - and, in his mind, always will be - the case. These are:

Sandpiper is a private company - as far as they see it, their first obligation is to their shareholders, not to you or anyone else who doesn't own stock in their company. Even in a life-or-death business like food retail, their attitude is that they've still got to make a profit for their owners.

I'll leave aside the fairly obvious question of whether it's moral to profit off of something everyone needs to survive and simply ask this - why is something so critical to our very survival as an island in the hands of a corporate mafia?

It doesn't take a genius to look at Mr O'Neill's reasoning and think that a lot of that wouldn't be so much of a problem if the people importing food didn't have to make a profit - say, if they were nationalised under the management of the workers who actually do the heavy lifting, so to speak. Sadly, Sandpiper doesn't publish its accounts, so we can't actually dive into how much money citizens could potentially save if the business was run in a socialist fashion, but we can certainly ask the question - is for-profit food distribution, controlled by one large private company or a few large private companies, really the best deal for Jersey? Could cash be shaved off manager's salaries by workers' self-management, or would the lack of an obligation to make a big profit drive down prices for ordinary people? You've gotta ask - is the current system a rip-off, and if so, why is it being allowed to continue?

One need only look at Venezuela for how these oligopolies on crucial supplies like food - or even private, for-profit distribution of food at all - can be weaponised against the population they supposedly exist to serve. Since the early 2000s, opposition-affiliated corporations have systematically hoarded food and medicine in order to push up prices and undermine the socialist Bolivarian government. Opposition-controlled offshore corporations have been caught redirecting food supplies to smugglers near the Colombian border, who then sell the food back to Venezuelans at a higher price. Could this happen in Jersey if a socialist government was ever to be elected?

Corporate ownership of the crucial resource that is food distribution is an immoral, inefficient and dangerous rip-off that drives up profits for a few fat cats like Tony O'Neill and drives up prices for the rest of us. It's time these oligopolies were wound up and shut down - unless, of course, we want the cost of living to keep rocketing up and the continual increase of the amount of people living in relative income.

The grand old gravy train is rollin' down the tracks yet again at SOJ headquarters.

As the Gang of Five - now, I suppose, the Gang of Six - stumbles from scandal to scandal, it's come out that Ein Kompanieführer has decreed that the public will be footing the bill for another one of his pet sycophants.

So, who's our shiny, expensive newest consultant? A Mr. John Laverick, former corporate suit at, er, Carillion, the construction firm which collapsed earlier this year after racking up £7 billion in debts and is now under investigation by the Insolvency Service in the UK. Fresh from overseeing the biggest compulsory liquidation in British legal history, Laverick is now Parker's "chief information officer" - in English, the new head of IT. He's the latest addition to Parker's hit squad, now comprising four UK consultants being paid something between £1,200 and £1,400 a day. Yes, folks, you heard that right, over a thousand quid a day.

According to the rag's coverage, someone - presumably a disgruntled civil servant - has handed them new information suggesting that these ludicrous rates have actually gone up - their source has suggested that the bill for the Gang of Five has crept up to over £9 million in less than a year.

Parker and co. must be laughing all the way to the bank.
at September 03, 2018 No comments: